Goshen – Temperatures in the 90s didn’t deter the 100 golfers who turned out to Golf for Charity in support of Catholic Charities of Orange, Sullivan, and Ulster. The 12th annual outing, hosted at West Hills Country Club in Middletown, raised more than $52,000 in support of the programs Catholic Charities provides in its three-county service area, including addiction treatment and prevention and emergency food and shelter assistance.

“Generous support from sponsors, golfers, raffle donors, committee members, staff, and volunteers allowed us to top last year’s fundraising success at our 2018 Golf for Charity fundraiser,” said Larsen. “The golfers enjoyed fun, friendly competition while raising much-needed funds for Catholic Charities so that we may lend a helping hand to those who are struggling in our community.”

Taking top prize for women was the foursome of Rosemary Baczewski, Joanne Sturans, Deb Snyder, and Regina Toomey-Bueno. The winning men’s foursome was comprised of Michael Klugman, Tom Larsen, John Pascarelli, and Steve Pascarelli. Joanne Sturans and Lou DeMaso won prizes for the longest drive contest and Mark Gualandi and Regina Toomey-Bueno won the closest to the pin contest. All of the winners received gift certificates to the West Hills Pro Shop.

“We are so grateful to Tom Larsen, our staff, and the team at West Hills for making our 12th annual golf outing fundraiser a successful day. A good time was had by all,” said Dr. Dean Scher, CEO, Catholic Charities of Orange, Sullivan, and Ulster. “The tremendous generosity supporting this outing, our second largest fundraiser of the year, goes a long way toward supporting the work we do in the community which allowed us to touch the lives of more than 52,000 individuals and families last year.”

Catholic Charities Community Services of Orange and Sullivan’s next fundraiser is the annual Orange County Country Roads Bike Tour, the Ride with the Camels, on Sunday, September 16. The Tour offers 10, 25, 45, and 65-mile rides through Orange County’s scenic countryside. For more information or to register, visit www.ocbicycleclub.org, or contact Kristin Jensen at 845.294.5124, ext. 303 or kristin.jensen@cccsos.org. The cost is just $35 per biker. Catholic Charities will also be hosting the Goshen Christmas House Tour on Saturday, December 1. Tickets are available by calling 845.294.5124, ext. 308. 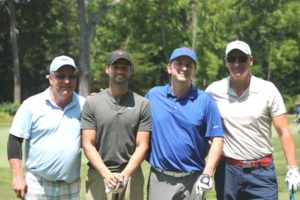