The craft beer industry generates nearly $5.4 billion in New York State through beer production, sales and the operation of brewery tasting rooms, according to a new Economic Impact Study commissioned by the New York State Brewers Association. The 2018 data shows that the over 400 breweries in the state contribute significantly through spending and jobs at both breweries and in allied industries.

A county-by-county breakdown of the study allowed an Orange County-centric view of the industry. Orange county has 120 brewer jobs, 370 total jobs, over $26 million total wages, and $126 million total output, per the study.

Statewide, the study found that tourism has been spurned by the growth in breweries in the state of New York – $317 million in tourism revenue was generated by nearly 9 million tourists making brewery visits in 2018. Add that to another 40 million brewery visits by locals.

New York State Brewers Association executive director Paul Leone says New York could cross the 500 brewery threshold “comfortably” in the coming years, as there are125 breweries-in-planning. Currently, he said, the fastest growing regions for breweries are in the Rochester/Finger Lakes, Hudson Valley and Long Island areas.

What does that mean for Orange County? As the New York Times reported in their 2018 article featuring chamber member Equilibrium Brewery, craft breweries are helping revive local economies. David Barnett, a Chicago-based senior research analyst for JLL, the commercial brokerage firm is quoted in the New York Times article saying, “The economic ripple effects are definitely there…[Breweries] create a cool tourism aspect for out-of-towners, but it’s been good for residents as well.” 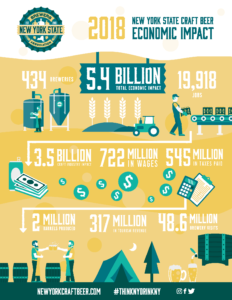